Not to be mistaken with the band, Squirrel Nut Zippers are delicious nostalgic candy caramels. 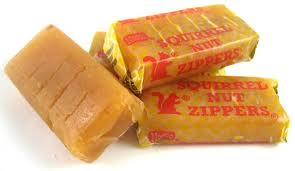 A Squirrel nut caramel is a chewy caramel candy with pieces of peanuts mixed in. The version we have is caramel based, there was also a version made with chocolate. Squirrel Nut Zippers were developed in the mid 1920s .
Squirrel Nut Caramels were originally made by the Squirrel Brand Company. Squirrel Nut Zippers actually had an interesting beginning.  It was named after an illegal drink during the Prohibition era.  Back in the 1990's the retro swing band of the same name actually gave out the candies during their performance.
After being sold to Southern Style Nuts in 1999, it was purchased in 2004 by Necco brands. In July of 2010, Blooms Candy Shop tasted them, loved them, and brought them in the store.
July 29, 2010 — admin
Tags: Blog Squirrel Nut Zippers Candy Dallas
© 2022 Blooms Candy & Soda Pop Shop. Website template by Shopify